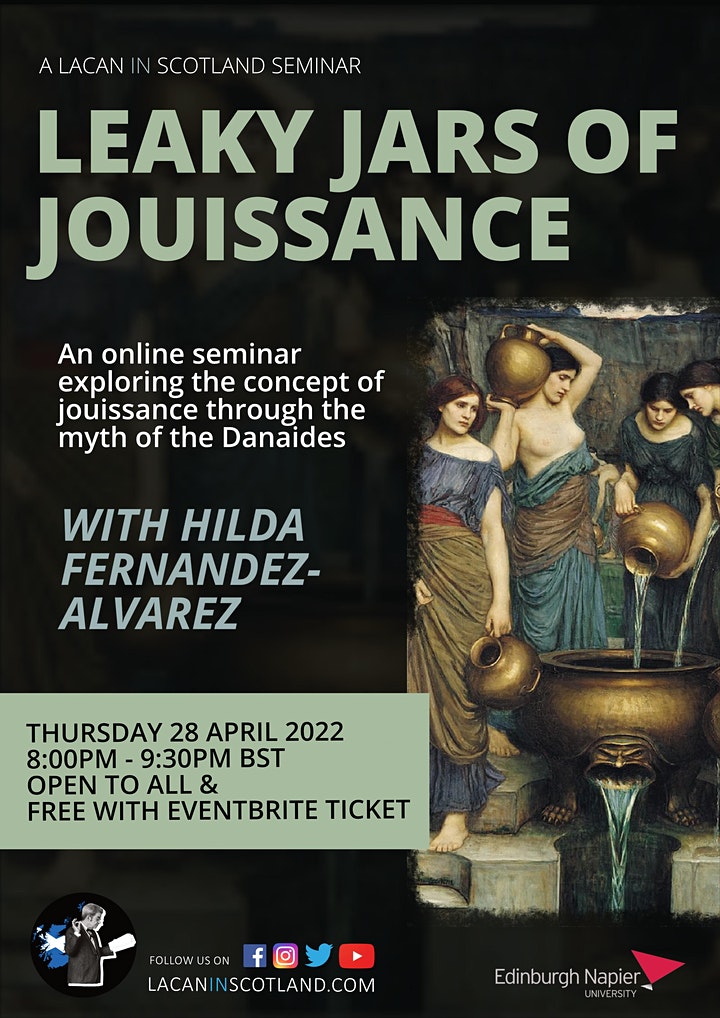 Join us for an online event on the Lacanian concept of jouissance and the Greek myth of the Danaides, with Hilda Fernandez-Alvarez

Lacan first introduces the phrase ‘surplus jouissance’ in Seminar 17, invoking Marx’s notion of surplus value. In the context of this same seminar, Lacan connects jouissance to the Greek myth of the Danaides, the daughters of King Danaus, who, after committing mariticide, are condemned to a quasi-Sisyphean fate of having to eternally replenish a leaking jar.

Drawing on this myth, Hilda Fernandez-Alvarez will explore the notion of surplus jouissance, seeking to add clarity to this often confounding concept and how it relates to both the individual subject and wider social discourse. Following a review of how the term has been treated in the Lacanian literature, Hilda will move on to consider how it operates as mechanism of the Anthropocene, one which has heralded unhinged consumerism, waste and planetary devastation. In conclusion, Hilda will consider how analysis itself might function as a corrective to this tendency, allowing us to subvert our eternal repetition, our unceasing Danaidean trap.

The seminar will take place on Zoom at 8pm-9:30pm British Summer Time (BST) and will be followed by a virtual pub gathering on the platform ‘Wonder’. Please be aware that Eventbrite (and Facebook) usually automatically converts the event time for the time zone from which you view the page.

The event is open to everyone and free with Eventbrite registration. The Zoom link will be available for registrants on the ‘Online Event Page’ (found when accessing your ticket on Eventbrite) on the day of the seminar, which is where you can also find information about the virtual pub taking place afterwards.

Hilda Fernandez-Alvarez is a Lacanian psychoanalyst based in Vancouver, Canada who has vast clinical experience with diverse populations in both a public and private setting. She has an MA in Clinical Psychology and Literature and has just finished her PhD at Simon Fraser University, entitled “Mapping the discursive spaces of trauma and healing in mental health: The institutional unconscious”. She co-founded the Lacan Salon in 2007 and currently serves as its Clinical Director.